Simplify and accelerate the development of XR applications thanks to GameArter's framework built on the top of XR Interaction Toolkit from Unity. 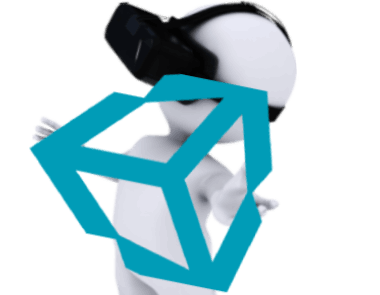 GameArter's XR framework is being developed for our own need of development VR applications for companies which is service we provide under brands GameArter VR and VRapps.cz.

The framework is designed to be performance optimized, logically structured and independent in use. It's purely based on XR Interaction Toolkit and main added value is existence of pre-created / generic components using multiple objects and scripts from the toolkit. Together with protection mechanisms from forgotten dependent scripts, GameArter's XR Framework helps speed up development and eliminate errors.

XR framework is written to work on the top of Unity's packages. Before you start...

Are not these steps clear enough? Then check video tutorial for setting development configuration for Oculus Quest.

XR Rig is a gameobject representing a user playing an XR game or using an application. XR Rig associates everything related to a player, from camera, physics, movement, controllers, appearance, properties or skills.

XR interaction toolkit offers everything needed for XR Rig creation (XR components are available under menu Components → XR, under right mouse button → XR, and through scripts) and interaction. However, the toolkit is composed of many independent components which must be placed into the Unity project and properly configured. Such configuration of XR Rig is very time consuming, and beside XR components, it usually requires also some amount of a custom code.

XR Rig gameobject usually contains many gameobjects with many associated components. One such configurable, performance optimized XR Rig is available as a prefab inside folder "GameArter.XR". By a use of the prefab you may save hours of configuration and settings of your XR Rig. Of course, you can modify the rig from prefab according to your needs, or create your own. GameArter.XR Framework is written in a design that allows that. 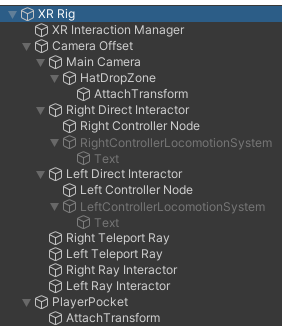 All important XR Rig components are placed right in the hiearchy which is necessary for freedom of modification of any component. Every GameObejct from the list above contains many customizable options which may be easily changed through its inspector window.

XR Rig inspector window then offers independent user's configuration and configuration of active features (selecting which features have to be active and which not helps keep the app is a state you prefer + keep better performance of the app.

Components Transform, XR Rig, Character Controllers, Snap Turn Provider, Locomotion System and Teleportation Provider are either native Unity or XR Toolkit based scripts without any modification. However, they must be placed right in the GameObject either for a reason of free setup or to guarantee functionality of active features. If the components are not necessary, XR Framework will disable them on startup.

Controls of any feature may be set in Inspector window of a gameobject of the purpose, or through a script if direct change is not possible. Scripts that handle the function are located directly on the object (if they drive the single task only), or on parent element if they manage interaction of more child components. For example, detection of hand controller to display + option to switch between hand and controller is attached right to Right / Left Controller Node gameobject (HandController.cs script), while full management of locomotion systems is inside "XRRigManager.cs" script attached to XR Rig game object.

Independent resources (GameArter.XR/Independent Resources) have nothing related to XR Framework iteself, but they are useful in many projects. Basically, they are available in a form of Prefab which may be simply added to the scene for getting information right in VR space, during a test with VR headset.

This framework is released under MIT licence, free to use for everyone. It's being developed continuously based on my needs and clients requirements. If you would like to contribute to the framework, you can post your contribution on Github. If you have a tip for anythinw which sould be added, you can send it at [email protected] However, take into account, that adding is not guaranteed.